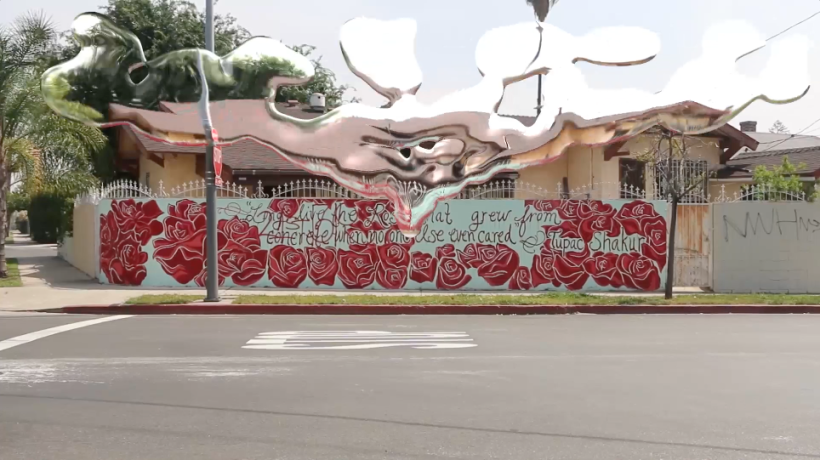 a continuous video loop of a leaking mural of red roses surrounding a barely legible (due to graffiti) quote: “long live the rose that grew from concrete when no one else even cared” from a poem by american rapper tupac shakur. the quiet and continuous leakage of the nebulous, semi-invisible mysterious substance dissipates into its surrounding neighborhood, prone to be inhaled by its inhabitants.

although murals, and the graffiti they may bear, are often overlooked entities within the urban landscape, their inconspicuous presence can trigger subconscious bodily and emotional responses in the passersby. via the animated leakage, the video puts forth this hidden agency of the mural and its graffiti. the leakage is presented as matter, from the graffitied mural, that can enter a body and affect it, elevating the graffitied mural to an active agent of change.

tupac’s quote is a metaphor addressing resistance and oppression, and like his quote, the graffitied mural it comprises is also a metaphor addressing resistance and oppression. his painted words directly murmur to the proximate urban concrete dwellers of the hood, including those with spray cans in their hands, that they are or can be roses bursting through the oppressive concrete. and the spray painted text imposed on the mural can be seen as a last ditch effort to be heard when no one else even cares. a contentious act of resistance to oppression, but never the less, an act of resistance. because, after all, what does it mean to deface private property in a society that values private property more than bodies in the hood? (r.i.p michael stewart, israel hernandez-llach, delbert rodriguez gutierrez, and the many others killed by police for painting on private property)